At the Headwaters of the Kansas River

Junction City was founded in 1858 and named from its position at the confluence of the Smoky Hill and Republican rivers, forming the Kansas River. It developed as a trading center for nearby Ft. Riley, a U.S. military post since 1853 and the headquarters of Lieutenant Colonel George A. Custer.

Junction City was selected in the spring of 2021 as a designated Main Street community by the State of Kansas. Main Street seeks to revitalize, modernize, and invigorate a community’s downtown specifically an area local leaders select as its Main Street. The competitive selection process was challenging but a dedicated and enthusiastic committee of city leaders sought the designation and continue to celebrate that initial success.

The organizing committee now serves as the board of directors of Junction City Main Street (JCMS) and fully realizes the hard work is just beginning but expect a payback that will be positive and impactful.

Main Street is a program designed to work within a predetermined geographic boundary which often largely mirrors a central business district. However, the message shared throughout Geary County by the board is that any success whether it is a new school, new or growing business, or event activity will directly benefit downtown and the success of downtown positively impacts Geary County.

Sources: Groceries Then and Now by Dr. Virleen Carlson; The Historic Downtown Business District of Junction City, Kansas; A Walking Tour (pamphlet); numerous telephone directories at the Geary County Historical Society and They Came To The Smoky Hill: History of Three Generations by Frank Ziegler Glick.

Please note that the information obtained for the history of downtown Junction City and Junction City came from the Geary County Historical Society. 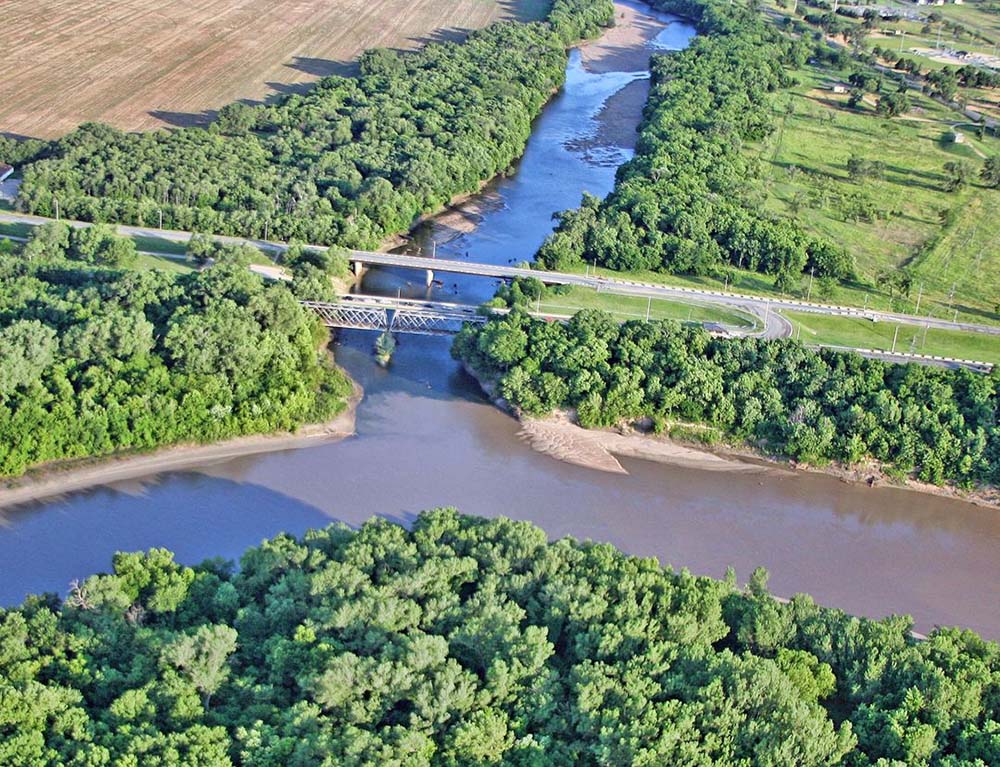 Three different communities were planned for the site at the junction of the Smoky Hill and Republican Rivers before the town of Junction City finally took root. The town site was first chosen by three land agents of the Cincinnati-Manhattan Company who arrived here in May of 1855. The proposed community was named Manhattan and one of the agents, John Pipher, was elected mayor. Supplies to build the city, including prefabricated houses, were purchased and sent up stream on the steamboat “Hartford.” But this vessel went aground near the site of present-day Manhattan, which was then a freshly established settlement called New Boston. The settlers went ashore and agreed to merge with New Boston if the name were changed to Manhattan.

Following the merger, the captain of the “Hartford,” a man named Millard, proceeded to the original town site at the fork of the two rivers. He, along with two other men, claimed the town site and renamed it Millard. It seems that the backers of this new city were not too active except in the sale of town lots in the East and Millard existed only as a “paper” town.

Another town, Humbolt, was then planned for the site by some local farmers a year or so later, but again, no one actually resided in the town.
It was in the fall of 1857 that a group of settlers in the area once more made an attempt at establishing a town at the junction of the rivers This time the name Junction City was given to the site and work was begun on the first buildings in the spring of 1858. In February 1859, Junction City was incorporated by a special act of Kansas Legislature and by 1860 it had begun to resemble the busy trading center first envisioned by its founders.

Fort Riley is named in honor of Major General Bennet C. Riley, who led the first military escort along the Santa Fe Trail. The fort was established in 1853 as a military post to protect the movement of people and trade over the Oregon, California, and Santa Fe trails.

In the years after the Civil War, Fort Riley served as a major United States Cavalry post and school for cavalry tactics and practice.

In 1887, Fort Riley became the site of the United States Cavalry School. The famous all-black 9th and 10th Cavalry Regiments, the soldiers of which were called “Buffalo Soldiers”, were stationed at Fort Riley at various times in the 19th and early 20th centuries.

Most notably, from 1970 to 1996 the post was home to the famed 1st Infantry Division, also called “Big Red One”. Between 1999–2006, the post was headquarters to the 24th Infantry Division (Mechanized) and known as “America’s Warfighting Center”. In August 2006, the Big Red One relocated its headquarters to Fort Riley from Leighton Barracks, Germany.